Whyte along with his teammates McDonald, Fermin receive football athlete of the week honors 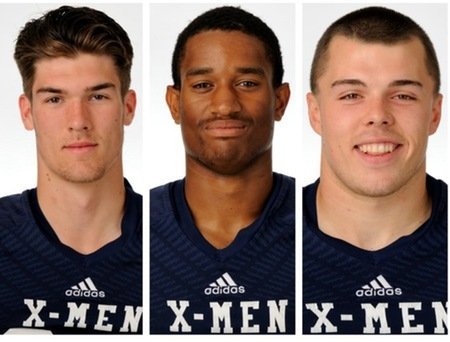 X-Men Football Special Teams Athlete of the Week
X-Men long snapper Gordon Whyte was named the StFX Football Special Teams Player of the Week for the week ending Sept. 10, 2017. Gordon, a third year Business student from Toronto, Ont. played a strong game on special teams defense for the X-Men in their loss to Acadia on Saturday. Aside from the long snapping duties, the linebacker played a key game tackling and blocking on the punt return defense team.

X-Men Football Offensive Athlete of the Week
X-Men receiver Greg McDonald was named the StFX Football Offensive Player of the Week for the week ending Sept. 10, 2017. Greg, a second year Business student (1st year eligibility) from Halifax, NS led all X-Men in receiving yards in Saturday’s loss to SMU. He had 9 receptions in the game for 108 total yards, averaging 12 yards per catch. He is currently 4th overall in the AUS in receiving yards/game with 71.0.

X-Men Football Defensive Athlete of the Week
X-Men defensive back Nathaniel Fermin was named the StFX Football Defensive Player of the Week for the week ending Sept. 10, 2017. Nathaniel, a fourth year Arts student from Pickering, Ont. led the X-Men defense in tackling on Saturday’s loss to Acadia. Nathaniel had a game-high 8.5 tackles of which 8 were solo tackles. He currently leads the team in tackling this season and is 4th overall in the AUS with 17.5.