In my 30+ years in the fitness industry, I observed three major problems in the training that competitive, elite and professional athletes are doing:

These three factors are the greatest contributors to the plethora of ACL tears, hamstring pulls, and Achilles tendon ruptures in sports.

“The ability to react to unanticipated circumstances in sport by relaxing muscles to dissipate and or otherwise re – distribute mechanical energy cannot be understated. Muscles have to switch from contraction extremely fast in order for athletes to execute changes of direction at high speed. This skill of course comes in handy to avoid injury.” – Reverse Engineering Injury Mechanism and the Consequences of Forward Engineering

If you watched Game 5 of the Raptors vs Warriors in the 2019 NBA finals, Kevin Durant went down with a no contact injury which turned out to be an Achilles rupture. 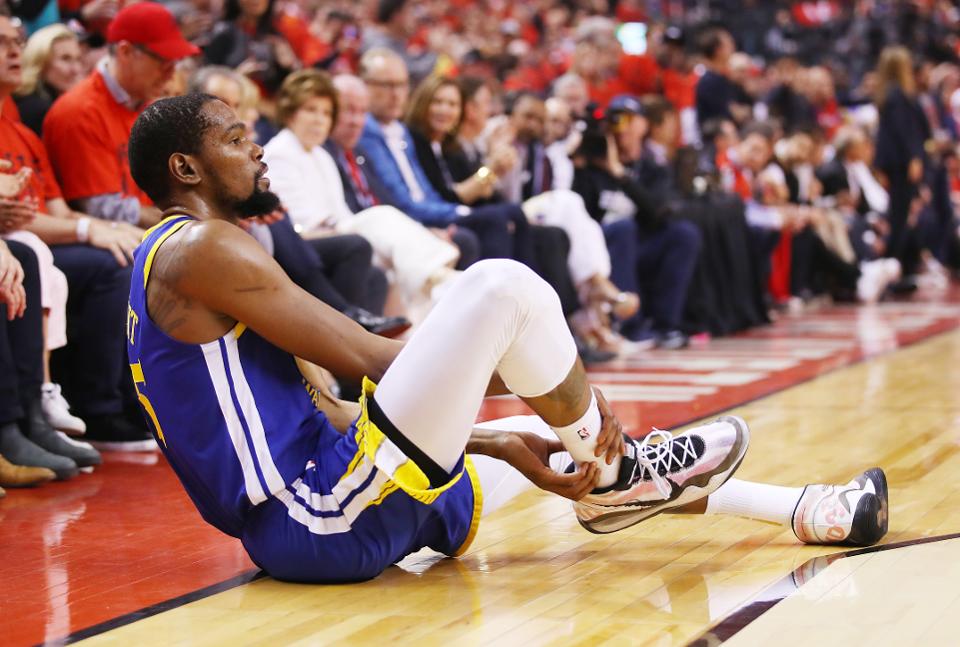 TORONTO, ONTARIO – JUNE 10: Kevin Durant #35 of the Golden State Warriors reacts after sustaining an injury during the second quarter against the Toronto Raptors during Game Five of the 2019 NBA Finals at Scotiabank Arena on June 10, 2019, in GETTY IMAGES

This is obviously a very unfortunate event for Kevin Durant (KD), and as all athletes know that their body is their money maker. With an injury like this, his odds of his contracts being bought out, renewed or extended significantly decreases.

But this wasn’t caused by just a single year of poor training, this was systemic. His foundation from the get-go has a lot to do with it, so continuing to train hard with a poor foundation is just compounding the effect.

Below I’m going to break apart some of his past training experience which has led him to his injury today.

Josh wrote in the article, “By putting him in unstable environments to challenge his central nervous system, Daub has improved Kevin’s overall strength, balance, and proprioception [body awareness in movement], which together translate into making him an even more dominant force on the court.”

This is complete nonsense and ineffective. The only way to challenge one nervous system is to activate high threshold motor units in the muscle and that is done by lifting heavy loads of 80% +, the heavier weight one lifts the more motor units activated in the muscles and the more your central nervous system is taxed. Balance training is just babysitting athletes, it’s actually detraining athletes and making them more prone to injury. Here is a good example of how motor units are activated.

Josh goes on to write about the few exercises Kevin used during his time at Texas to increase flexibility and mobility through his spine, hips and feet. The full list can be found here, but I’ll be focusing on a few key things that will help you avoid the same fate as Kevin Durant.

The reason why its an issue: Doing exercises onto an unstable surface for the purpose of increasing strength and stability is dumb and a waste of time. Science clearly states to increase strength you must learn to activate higher threshold motor units, that means using adequate load to elicit such a response. Also, using 80% + loads on an unstable surface is dangerous, risky, and it’s almost impossible to use that load on an unstable surface.

Problem #2: Kevin Durant’s strength & conditioning coach said, “I keep my hand on Kevin’s knee to make sure there is no [forward] shifting, which can put undue stress on the [knee]. We do a lot of multi-planar movements to place him in a very difficult situation as far as his knee, hip and back alignment is concerned.”

The reason why its an issue: This simple technical cue is responsible for the deterioration of the biological leg springs. It’s all connected: the ankle, knees, and hips.  In simple terms, the Achilles tendon is not being stretched it is actually being shortened under load. To give you an analogy, if you leave an elastic band unused in a shortened state for years, it becomes dry and brittle. Then when one decides to load and stretch that elastic band explosively. What happens? It snaps! That’s exactly what happened to Kevin Durant and thousands of other athletes.

What should you do instead: The complete opposite! One must drive the knees past the toes as far as possible, the goal is to touch the hamstring and calves together, no daylight. Your torso should be in a backward lean, this will maximally stretch the psoas muscles and groin.
With the knee as far past the toes stretches the muscles, ligaments, and tendons in the ankle complex. Which keeps the strongest tendon in the body the Achilles tendon healthy and long through a loaded full range of motion. Train the joints to full range of motion as your body are intended to. If you can’t do it with weight, start with body weight, if you can’t do it with body weight, get assisted guidance to get into the full range prior to heavy loading.

Problem #3: Kevin Durant’s strength & conditioning coach said “Single-Leg Dumbbell Curl-to-Press – This is great for single-leg proprioception and balance. It is a combo lift because it’s a Bicep Curl associated with a Shoulder Press. Combo exercises allow us to get our training done in less time and also to put Kevin in a position where he has to stabilize with his core to go through the different movements.”

The reason why this is an issue: Is this a circus act? When you choose exercises for athletes one should have two questions based on scientific principles:

And the principles of motor unit activation should be at the forefront of your decision making for these athletes. Because the athlete who can activate more muscle motor units in an instant is 99.9% of the time the more dominant athlete as long as they’re on the same level of skill.

What you should do instead: Stop being lazy and break up these exercises into a dumbbell curl and dumbbell or barbell overhead press. By doing so, you can use more weight, and more weight will get you stronger or bigger depending on the objective. Whether its size or strength, one can use more weight to elicit a faster adaptation response. Faster adaptation response leads to achieving strength and size goals faster.

I can hear the core training zealots now claiming “standing on one legs will activate more core” — this is complete bullshit.

You develop a strong core by putting heavy weight or your back, shoulder, overhead pressing and ab work. Standing on one leg and pressing overhead (20-50lbs lightweight) WILL never build nearly as strong of a core as an athlete pressing (200-300 lbs heavyweight) overhead.

These exercises are total nonsense, gimmicky and a way to fool people in wasting their hard earned dollars. A lot of coaches come up with these cool circus type exercises to be different, to stand out, but most of them are unaware that they are doing it at the detriment of the athlete.

There are a lot more exercises I can break apart, but I think at this point, you get the point. The basics are the basics, and time tested basic lifts has developed some of the most dominant athletes in the world. 2-Time World Championship Coaches like the great Al Vermeil developed some of the best championship team with basic exercises such as squats, presses, cleans, jerks to name a few. The key is to address the athlete’s needs with sound scientific principles and methods, not gimmicks.

Bud Charniga papers on Misinformation, Reverse and Forward Engineering in the Strength and Conditioning Industry supports my observations in the trenches over the past thirty years. His essays are about the U.S.’s misinformation about strength and conditioning, in particular how strength coaches use slow exercises and balance training methods to develop athletes for dynamic sports.

This is a big, big mistake that negatively impacts the athlete.

The preponderance of these methods are creating an epidemic of injuries such as ACL, MCL tears, Achilles tendon ruptures, and hamstring pulls in the lower body. It also leads to upper body injuries such as rotator cuff tears and torn shoulder labrum.

“Achieving a somewhat larger mobility in the joint than is required for the selected type of sport, creates a mobility reserve in the joints, which in turn makes it possible for the athlete to execute movements with greater speed and greater force.” – N.G. Ozlin.

Understand that it’s clear with all these injuries, surgeries, and knee replacements that we, as strength coaches, physiotherapists, chiropractors, and the entire community needs to take a long look at how we’re training athletes. In my view, we’re failing them.

This is why it is vitally important that proper training is done during the off-season, and in-season. Kawhi Leonard, 2019 NBA Champion & MVP said it best,

“This is why I work out for all summer, during the season, and I’m happy that my hard work paid off.“ – Kawhi Leonard 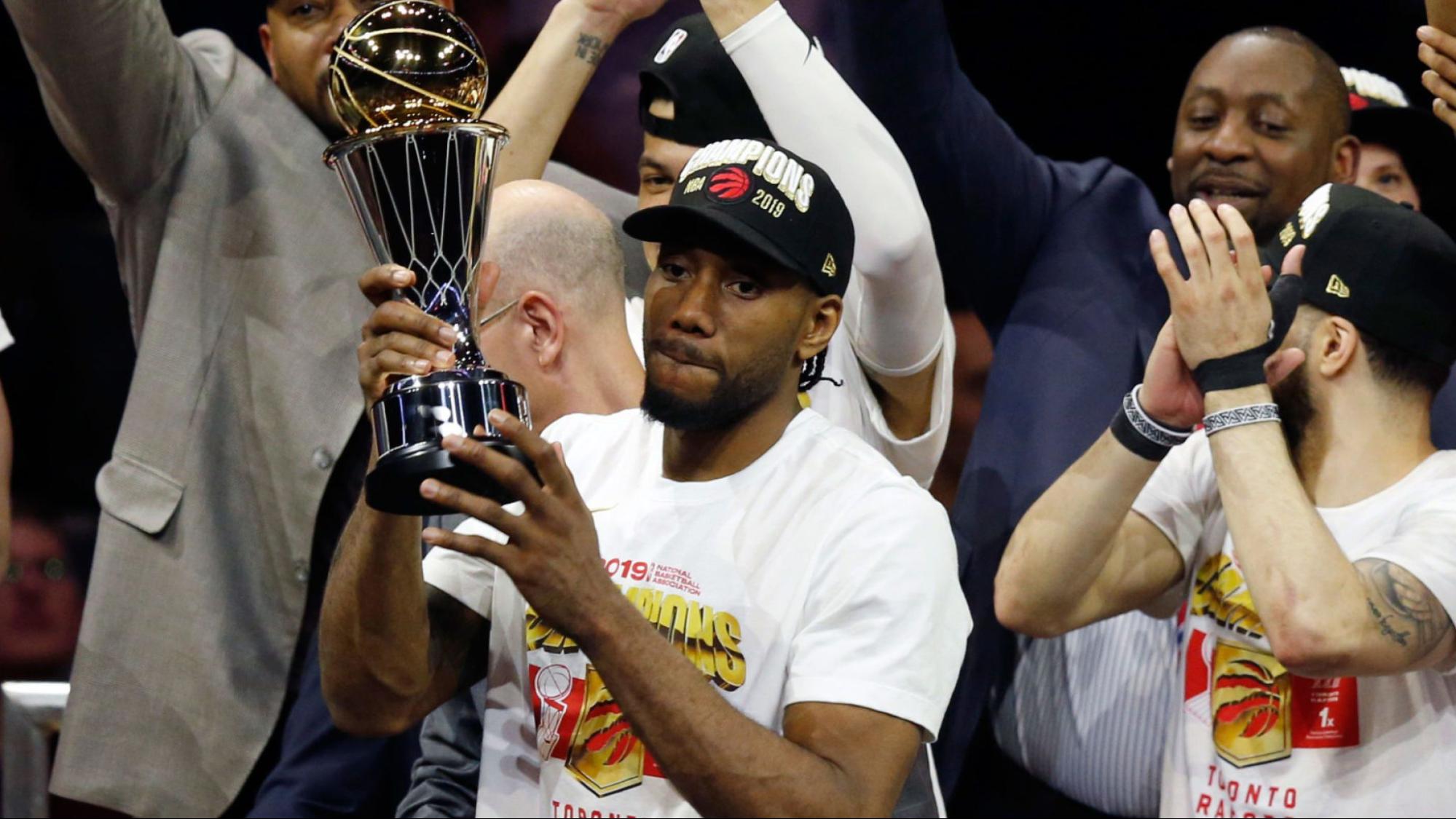 Simply put, stop doing all the silly exercises people are posting on Instagram if you haven’t even taken care of the fundamentals.

And if your coach/program is not training you to full range of motion, that’s an instant red flag and you need to question why, and if the reason isn’t compelling — I highly recommend you look for an expert that knows what they are doing.